An Argyle Sweater comic featured two balloons trapped between the ceiling and the ceiling fan. One says: “You flipped the wrong switch again” and the other replies: “Why do we even own a ceiling fan?”

I think it’s an appropriate metaphor for so many situations. Instead of blaming others (or ourselves) for the outcome that is experienced, why don’t we ask why we continue to put up with what caused the problem in the first place?

Instead of stressing about what to get Uncle Joe for the holiday, question whether you should continue the tradition of exchanging gifts. Rather than have repeated angst over how a process is designed, propose a new way of doing things. An option to fretting about the time spent in meetings is to cancel some of them and use other ways of communicating.

The next time you find yourself complaining about what is, force yourself to step back and ask why you are in this situation at all. Instead of repeatedly trying to get the balloons unstuck, you may be far better off by removing the ceiling fan altogether. 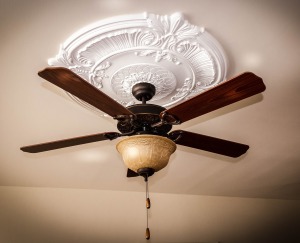