At the last primary debate, the last question asked was “tell us about a friendship you’ve had that would surprise us.” All but one of the Democratic candidates shared examples of Republicans, as if being civil with someone across the aisle was surprising.

It reminded me of the story of Donna Red Wing, executive director of One Iowa, the state’s largest LGBT advocacy organization, who decided to honor her deceased friend by continuing her work on reconciliation. So, Donna thought about who was the “most unlikely person on the planet” she could reach out to and landed on Bob Vander Plaats, the president of the Family Leader, an organization that seeks to inspire Christ-like leadership. While quite nervous at first, the two have developed an uncommon friendship – exchanging conversations as people beyond their positions. It’s worth your 5 minutes to hear their reflections.

Donna and Bob still see the world from very different perspectives and haven’t changed their position on any of the major issues. Their lesson is that you “can fight the good fight in the court of public opinion, but you don’t have to hurt each other.” It’s a good mantra for everyone.

Think about the question that the debate moderator asked or that Donna asked herself – what would your answer be? Maybe today, inviting an unlikely person to coffee could be the start of an uncommon friendship that could increase civility in your office, your family circle or your community. Toast your lattes to the advice of the late Stephen Covey: “Seek first to understand.” 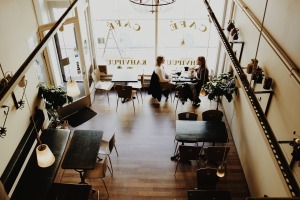