The Dickeyville Grotto is unlike any other. The grotto is actually a series of shrines, paying tribute to numerous religious icons as well as to patriotic legends – all done in stone that is embedded with brightly-colored objects from all over the world. The shrines are comprised of things you don’t expect to find in Wisconsin: “colored glass, gems, antique heirlooms of pottery or porcelain, stalagmites and stalactites, sea shells, starfish, petrified sea urchins and fossils, and a variety of corals, amber glass, agate, quartz, ores, such as iron, copper and lead, fool’s gold, rock crystals, onyx, amethyst and coal, petrified wood and moss.” People just walk through and have wide-eyed stares at what is before them.

The entire grotto was built from scratch by Fr. Matthias Wernerus from 1925-1930. He must have spent most of his free time constructing the shrines, fences and structures that reflect his love of God and his love of the United States. It stands almost a century later as a testament to his labor.

I hope that today, as well as on most days, you are able to dedicate your time to something that you love just as Fr Werenerus did. Maybe it’s not building a shrine or grotto, but I wish for your labor to be filled with the same level of love. 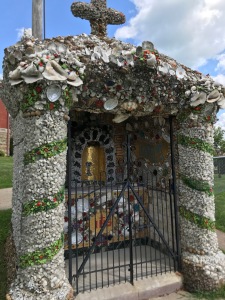 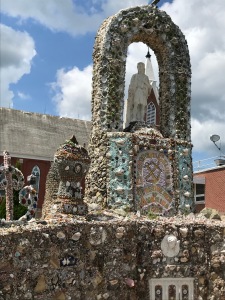