When it was suggested that we visit tar pits when we were in Los Angeles, I thought that they were joking. It turned out to be a fascinating lesson in understanding the Ice Age and how it impacted our ecosystem today.

The La Brea Tar Pits are an archeological wonder in central Los Angeles. Both in controlled excavating and even in spots in the parking lot, pools of oily tar are visible, just as they have been for centuries. Bones of thousands of plants and animals have been preserved in this tar and reclaimed for public display.

The Tar Pits Museum demonstrates how during the Ice Age the Wooly Mammoths would wade into the pits attempting to eat plants but become trapped in the sticky tar. Subsequently, wolves and other predators would see a vulnerable mammoth and move in close to eat it, thus becoming trapped as well. This continued throughout the food chain with more and more animals becoming victims of the tar pit pool.

Without the context at the museum it is hard to imagine how giant mammoths could disappear but seeing their exhibits makes the behavior logical if not inevitable. One thing led to another and to another and soon the whole ecosystem was mired in a gooey mess. Tens of thousands of years later archeologists are still excavating bones that recreate the disastrous path.

Think of what is the equivalent of a tar pit in your organization. Where do your employees continually get tripped up on policies or procedures that cause them to be stuck? What behaviors create complications that have a ripple effect throughout the organization? What conditions paralyze your staff and leave them vulnerable to outside forces? It may not be a literal tar pit, but there may be something toxic in your environment that mires the best of intentions. It’s time to do some organizational excavating! 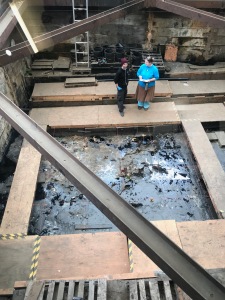