My neighbor’s yard looks terrible as most of the front yard is dead year-round, not just from the summer heat. It’s not from a lack of attention; she pays to have it chemically treated, but to no avail.

I know she is working on it because every month there is a sign from the fertilizer company stating that they have applied chemicals to the area. If I owned the franchise, I wouldn’t want my name associated with that lawn as it proclaims “abject failure” to anyone who knows it’s not the first treatment. No matter how many applications, the yard remains barren.

The sign reminds me that brands are built on little interactions that often go without notice to those crafting a brand strategy. Some corporate person thought it would be a good idea to leave behind little flags as a reminder that the service was performed, but never stopped to consider the harm those would cause in situations where the treatments failed. What if there were two different flags, including one that said: “we’re working on it…” and gave a phone number vs. just stating the name of the company?

It’s hard to think of all the scenarios while sitting in an office. To understand the true impact of your brand, get out into the field and see where you intersect with actual consumers. What you find may make you reconsider how to revive your efforts. 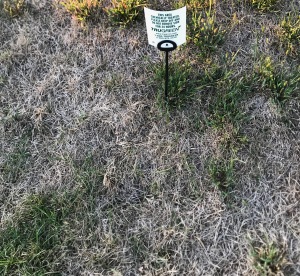