A comment on Twitter said that the author, Matt Hunziker, had spent the day trying to popularize the terms “pre-show” and “afterparty” to describe the five minutes on either side of a Zoom meeting where people are just chatting.

It reminded me of yesterday’s dot in which IDEO designer Dav Rauch spoke of the importance of the warmup as a way for people to shift which side of their brain was dominantly functioning. But it also highlighted one of the key elements missing by working-at-home – that of informal connection.

Without the pre-show or afterparty, we’re devoid of the watercooler conversations that help us feel as if we belong to an organization. We don’t hear personal stories or share emotions. We miss out on appreciating the humanity of our coworkers, just when it’s needed the most.

So, as you participate in yet another virtual meeting, resist the temptation to jump into the business too soon. Leave the connection open afterward. Structure some time to share the best meme people have seen or the worst thing their new “office mates” have done since work-from-home began. Embrace that pre-show and afterparty as an integral part of the time together rather than glossing over it as an afterthought. 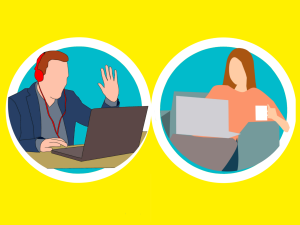