I have been lamenting about my filthy windows since winter. I tried to borrow a power washer to no avail. The person I tried to hire never returned my calls. Finally, my housemate purchased a power washer and tonight we tackled the big task.

It struck me that with my “flippable” windows that tilt in, I ended up doing all of the window washing from inside without any power washer involved. In other words, I could have had this done since March. Yes, power washing the screens made a huge difference. Yes, washing the outside casings and siding makes the house look so much better. But for the part that bugged me the most, no new equipment was needed; it was just a matter of doing it.

Isn’t that the case with so many dreaded tasks? We put off exercising until we join a gym or fitness class when simple walking would make progress toward strength and health. We avoid beginning that project at work until we install new project management software when a simple legal pad could get us started. We eat out because we don’t have 100% of the ingredients instead of making an easy substitution.

The mind works magic when trying to avoid an unpleasant task. The next time you catch yourself listing reasons why you can’t do something until ______, power wash the thought from your head. I’ll bet there is a way, right now, without anything new, that you can take a step forward. 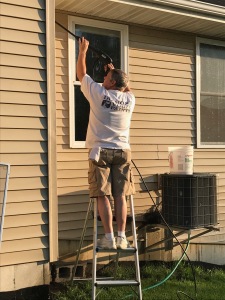