Written by leadership dots by dr. beth triplettPosted on May 30, 2013Leave a comment

The exterior of the state capitol building in Arkansas is not going to make the list as one of the Top Ten Most Beautiful, but it does have impressive doors.  Six 10-feet-tall bronze doors from Tiffany adorn what used to serve as the main entrance.  Now, visitors must go under the portico and enter in a dingy little doorway in the basement so that everyone can be funneled through a narrow corridor and be security scanned.  As a result, these beautiful doors are for show only, and go unused even though they require daily hand-polishing to keep their luster.  These doors have been polished every day since they were purchased in 1910, a seemingly huge waste of money for what Mr. Womack described as a “poor state.” 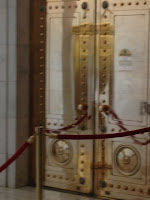 Couldn’t the state replace four of the six doors and leave just the middle ones with bronze?  Or leave the interior side to tarnish for a week since rarely anyone sees them?  Perhaps they could reconfigure the security set-up and actually use them if they are to remain?

Does your organization have the equivalent of bronze doors — something that is a resource drain, but is kept on just for show?  Is it really necessary or are there better uses of your time and assets?

Look around and see if there aren’t vestiges of something that made sense at one time, but  has outlived its usefulness.  What once was symbolic with one meaning may serve as even stronger symbol for change if you take steps to replace it.