The owner of The Biggest Little Farm (see dot #2649) speaks of a “flywheel in motion” to establish the land’s ecosystem where multiple elements of the farm all support and enhance each other. It reminded me of the flywheel concept in Good to Great, one of my favorite concepts from one of my favorite books.

Jim Collins writes: “The flywheel image captures the overall feel of what it was like inside the companies as they went from good to great. No matter how dramatic the end result, the good-to-great transformations never happened in one fell swoop. There was no single defining action, no grand program, no one killer innovation, no solitary lucky break, no wrenching revolution. Good to great comes about by a cumulative process – step by step, action by action, decision by decision, turn by turn of the flywheel – that adds up to sustained and spectacular results…We have allowed what change looks like from the outside to drive how we think it must feel on the inside, but really it is an organic development process.”

Wouldn’t it be nicer if there was a secret sauce – giving us hope that if we could just find it, we would have the magic elixir to turn our idea into a grand success? Unfortunately, it doesn’t work that way. But if there is a path to greatness, it is paved with consistency, turning the “flywheel” with coherence and intentionality in the same direction toward a sustained goal rather than giving in to the temptation to give up if results aren’t achieved quickly.

Success comes from plodding away with persistence – for longer than we’d like – until the momentum builds in our favor and synergies begin to occur. It’s hardest to make that first turn, still hard to make the second, third and fourth (and twentieth), but eventually a host of actions toward the same goal will allow the flywheel to compound your results. 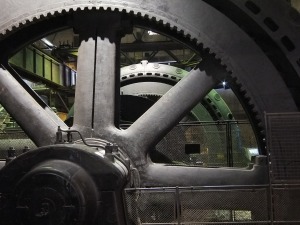